Driven by changes in daily use and a need for a bigger screen, I have decided to retire my venerable Toshiba Tecra M9 laptop from active duty and replace with a 17″ laptop.  But 17″ laptops have fallen out of favour with the computer manufacturers over the last few years and the whole laptop market seems to have taken massive steps backwards choosing style over functionality in many important areas.  Well, this is the world we live in and after looking over the main manufacturers models I’ve chosen a Dell Inspiron 17 5000 (model 5748) mainly because it was the cheapest I could find with a full HD (1920 x 1080) 17″ screen and Dell have a good history for Linux compatibility.  The model is new enough that there is little information on its Linux compatibility so I write this post in case it helps others.

The laptop arrives with Windows 8.1 installed and so uses the new (well, new to me!) EFI secure boot system.  Ubuntu 14.04 and Fedora 20 live USB sticks were able to boot while this was enabled.  This needs to be disabled in the BIOS to boot Linux Mint 17 (power on, hit F12, switch the BIOS boot option to Legacy – Secure Boot Off, boot from USB…).

Ubuntu 14.04 64-bit boots and almost everything appears to work on the Live version, only the wireless network is missing.

Fedora 20 64-bit boots and most things appear to work but no touchpad and no wireless networking.

Strangely, in the BIOS the multimedia/function keys are set to be multimedia keys by default and you have to hold the ‘Fn’ key for them to behave in the normal function key way.  Because it’s set in the BIOS this applies to both Windows and Linux.  At first I thought the laptop functions keys (brightness, volume control, etc.) weren’t working in Linux but actually they do once you’ve figured out if you have to press the ‘Fn’ key or not.  Is this normal these days?

The standard wireless network card the laptop ships with isn’t supported by the wireless drivers in any of the Linux distros I tried.  No problem, for £17 I simply upgraded the internal wifi card to an Intel 7260 wireless card which is well supported in Linux and adds 5GHz capability.  It is also the same card used in the next model up, the Dell Inspiron 17 7000 so I expected it to be compatible if Dell had done any white-listing in the hardware.  The card takes just a couple of minutes to install and works as soon as you boot into Linux Mint 17…

So far I’ve been unable to identify the manufacturer of the touchpad used on this laptop.  It works as a basic touchpad but I have no multi-touch functionality in Linux Mint.  Knowing the manufacturer is probably the first step in ensuring the correct driver is running in Linux.  It’s doesn’t seem to be a Synaptics touchpad, xinput list output as follows if it helps anyone… 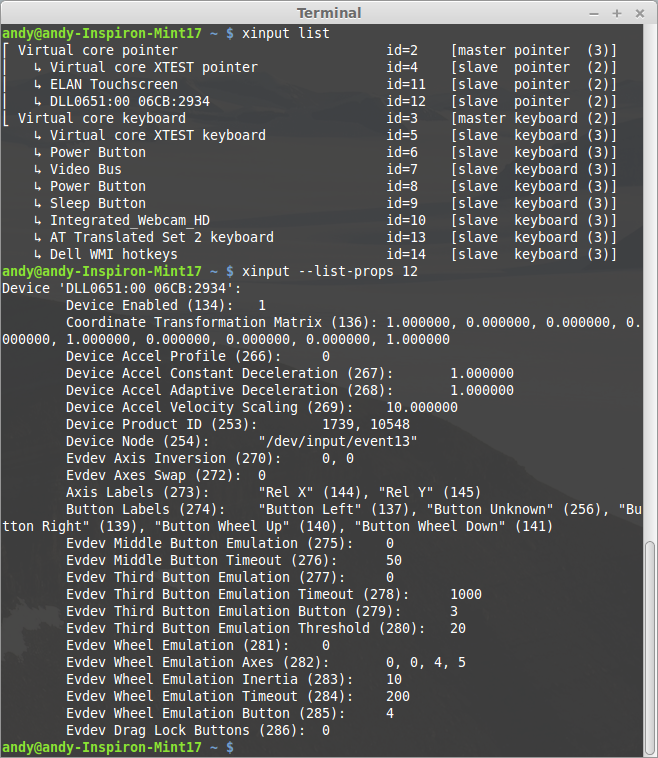 I could write more on the modern design aspects of this laptop (keyboard, touchpad, glossy touch-screen…) but I think I’ll leave it there as I start to sound like an old man.  Once you sort out wireless networking, this laptop runs Linux very fast, don’t get caught out by the function keys and the secure boot thing.