G7UHN has entered a new phase this weekend – the home station equipment has disappeared from sight and is now located on a shelf in a utility cupboard!  Operation of the station is enabled by a pair of Raspberry Pis serving out audio, serial and video feeds to a laptop computer which can be located anywhere in the coverage of the home wireless network.  The arrangement of hardware needs a bit of tidying up but this ‘remote’ configuration is now fully functional and I have been making my first digital contacts this weekend with good reports from around Europe: 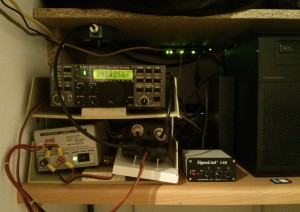 The setup is described in some detail on this page (I’m just catching up with my notes now).  Here’s a screenshot of my new ‘shack’ in operation:

This project has taken some time to get up and running but in doing so I’ve learned a lot and my Linux skills are now probably creeping out of the ‘beginner’ zone!

Note (November 2017): This is a bit of an old post (but it shows how long I’ve been running the radio in a cupboard!).  I presented an updated configuration at the 2017 RSGB Convention, slides and stuff from the “Low Cost Remote Radio” talk are on this page.

2 thoughts on “G7UHN is now invisible!”