Using the Line6 PodXT as an in-line multi-fx processor 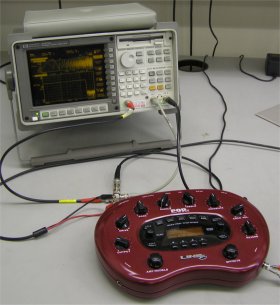 The Line6 PodXT is a superb guitar amp & effects modeller. I could spend a lot of time discussing the awesome range of sounds this unit makes available but, instead, I’ll assume you either already know about Line 6 and their modelling products or are interested enough to check their site, read some reviews and try the gear out for yourself.

The PodXT’s amp modelling is great but if you’ve already got a good amp you may be more interested in using the PodXT as a multi-effects unit. The PodXT has got within it more than enough effects to replace a half-decent set of pedals and its extra features like setup memories could make it a viable replacement for a traditional pedal board. But wait a minute – what about all that ‘true bypass’ stuff? Won’t running my guitar through a multi-effects unit kill my tone? Aren’t I better off with a selection of expensive pedals…?

This section charts my small efforts into looking at how a guitar signal is affected by simply running through a PodXT and a variety of other effects units. I’ve measured the frequency response of these units set to bypass (no amp modelling, no effects) so that the signal output should ideally equal the input. For those that are interested, this page describes my test setup in a bit more detail and also discusses the latency found on some devices.

Note – what I’m aiming for here is a setup with my PodXT that allows me access to its wealth of effects without altering the fundamental tone of the guitar and amp I’m using while the effects are off. I want to know if I can use the PodXT as a convenient alternative to a bulky and expensive array of effects pedals, with the added bonus of its amp modelling being available if I need to plug into anything other than my amps. This is not really meant to be a discussion on the validity of DSP in music technology.

The first way is by turning the Amp Models selection knob counter-clockwise to select “AMP 0: NO AMP”. In this mode, the Drive, Bass, Middle, Treble and Presence controls have no effect (there’s no amp model in operation to use them) but the Channel Volume control does. To get approximately the same level out as I’m putting in, I set Channel Volume to 10 and the Output knob to about 3. Note that the A.I.R. settings (cabinet, mic and room modelling) can still be active in this mode – scroll through the editing menu to A.I.R. settings and make sure you’re set to “CAB 0: NO CAB” and 0% Room to disable these effects. With the amp and A.I.R. modelling bypassed and any effects turned off, we should now have a clean guitar signal running straight through the PodXT. Actually, there’s one more thing to set – “What are you connecting to?” (enter the Tuner menu and scroll down to the next page). This setting is the last part of the PodXT signal chain and is intended to match the tone to best work with the amp/PA/mixer or whatever else you might be connected to. For the purposes of a flat EQ choose Studio Direct or one of the Pwr Amp settings – the two ‘Front’ settings apply some adjustable EQ dubbed “Tone Correction” which is further described below.

The second and easiest way is, while on the main screen (not in the editing menus), press the second soft-key beneath AMP to disable amp modelling as shown here. The amp selection now changes to “BYPASS: NO AMP” and if you enter the editing menu and scroll to the A.I.R. settings you’ll see that cab and mic modelling are now shown as off and the room setting has disappeared. Using the soft-keys on the main screen in this way was only implemented in the v3 firmware I think. I didn’t think much of it at first but now I appreciate the feature. Bypassing the amp modelling in this way also disables any Tone Correction (regardless of the answer to “What am I connecting to?”, the bypass output now has flat EQ).

The aim of this exercise is to achieve as clean a ‘bypass’ as possible through the PodXT. We’re aiming for flat EQ i.e. no effect on the signal on its way to your favourite amp.

OK, so after all this setup, how does it do? Below is a screen capture from the signal analyzer showing the phase response (top) and frequency response (bottom) of my PodXT’s bypass setting.

The phase response shown on these charts has no bearing on the device’s effect on tone – it’s actually a result of my test method and indicates the latency through the device, for more on that, see this page. The frequency response is a very pleasing flat line up to about 18 kHz where it drops off rapidly. This is pretty much as I had expected for a digital device such as the PodXT – it’s very good at handling frequency content up to a certain limit, beyond which the signal isn’t being sampled quickly enough to allow accurate reconstruction. Although an analogue-digital converter (ADC) can sample frequencies up to half its sampling rate (44.1 or 48 kHz in the PodXT’s case), an analogue filter is normally placed in front of the ADC to protect the ADC’s output from high frequencies which would wrap around to zero. This page explains it well.

This loss above 18 kHz – what does that mean? I had hoped to capture some measurements of typical guitar signals and show the nature of their frequency content. Unfortunately I haven’t come up with a satisfactory method of measurement from the equipment available to me yet. In the meantime, have a think about this: it’s generally accepted that the upper limit of human hearing is about 20 kHz and this lowers with older subjects. Have a read of these articles if you like:

Most people can accept that sounds above 20 kHz are not important for the listening experience. Guitar signals are based at a much lower range of frequencies, guitar speaker are voiced in those frequency ranges (have a browse around Celestion’s website) and only very low levels of harmonics are going to be present above 20 kHz.

A common complaint of the PodXT (and other similar units) is that, when playing loud at a gig, the tone that sounded so good at practice level has changed and lost a lot of the mid-frequency content. Some users are quick to blame the gear but the perceived ‘fault’ is actually a trait of human hearing caused by high volume levels. Have a read of this article which explains the Fletcher-Munson curves. Interesting stuff – as volume levels increase, you need to compensate for this effect by increasing the balance of mid-frequencies in your EQ.

While I had the PodXT hooked up to the signal analyzer I took the opportunity to have a quick look at how the “Tone Correction” controls work. The measurements above were made using the Studio Direct output setting to give a flat EQ. If either Combo Front or Stack Front is selected then a final layer of adjustable EQ called Tone Correction is switched on. The idea of this EQ stage is to compensate for the tonal characteristics of the pre-amp at the front end of the combo or stack amplifier you’ve plugged into, basically to counter-balance this out so that the PodXT’s amp models are heard as they would be through the unbiased flat EQ of the Studio Direct mode.

Note – Tone Correction is only applied if there is an amp model selected (including “AMP 0: NO AMP”). If you have bypassed the amp modelling via method 2 (above) there is no Tone Correction being applied, regardless of what it says on the display!

This page has some charts that depict how the three Tone Correction parameters (Lows, Focus and Highs) operate. One thing to note is that, with Tone Correction on, there is always a boost to the mid frequencies. The boost or ‘focus’ can be moved in frequency and the bass and treble frequencies can be cut to enhance the mid boost. In terms of compensating for the effect of passing through another guitar pre-amp this is probably a desirable feature (after all, Line 6 have tweaked this area several times and Tone Correction is the latest approach in their current software) and it can also be used as a solution to the Fletcher-Munson effect described above. My take on it is that Tone Correction is a good feature when using the PodXT as an amp modeller and you’re trying to get the sound of one of the amp models come through your own guitar amp unaffected. However, if you’re going to use the PodXT as a multi-fx unit with no amp modelling, Studio Direct is the way to go to achieve the flat EQ you’d expect from any other effects pedal in bypass mode.

Two other settings available on the “What are you connecting to?” screen are Combo Power Amp and Stack Power Amp. Both these settings are designed for when you bypass your guitar amp’s pre-amp by plugging the PodXT into an effects return socket. Because the power amp should simply amplify the signal to speaker levels (and not colour the signal like the pre-amp should) there is no need for Tone Correction. It’s not surprising then that both Combo Power Amp and Stack Power Amp settings both allow a nice flat EQ through the PodXT, just like Studio Direct. So what’s the difference? Good question! I haven’t spent any time looking at this. Perhaps a change in output impedance? I don’t know. If you do, let me know. The last setting available is to match the PodXT to a Bose PS-1 sound system which has a rather unique compensation EQ shown here.

So, now we have a bypass setting on the PodXT that allows the guitar tone through without any unwanted EQ. This allows use of the PodXT as a multi-fx unit placed in front of your amp without any worry of colouring the natural tone of your guitar and amp. What about true bypass and other effects units? Yes, they may pass though frequencies above the DSP cutoff but is that audible? In any real-life playing situation, my feeling is that’s unlikely given all the other factors such as imperfect acoustics, background noise, interference from other instruments…