This page describes how I’ve set up Common UNIX Printing System (CUPS) on my NSLU2 to run a print server allowing network access to my Canon PIXMA MP210 multi-function printer.

Setting up CUPS as a scan server on Unslung is actually pretty straightforward. After setting up Unslung on the NSLU2, I followed the AddPrinter tutorial on the NSLU2-Linux wiki. To set up the CUPS server it’s only necessary to follow the first section (“Getting It”) and then you can access the CUPS web interface to tweak your printer settings. In my case, my NSLU2 is set to a static IP at 192.168.1.2 and the CUPS server is accessed by entering 192.168.1.2:631 in any web browser on my network: 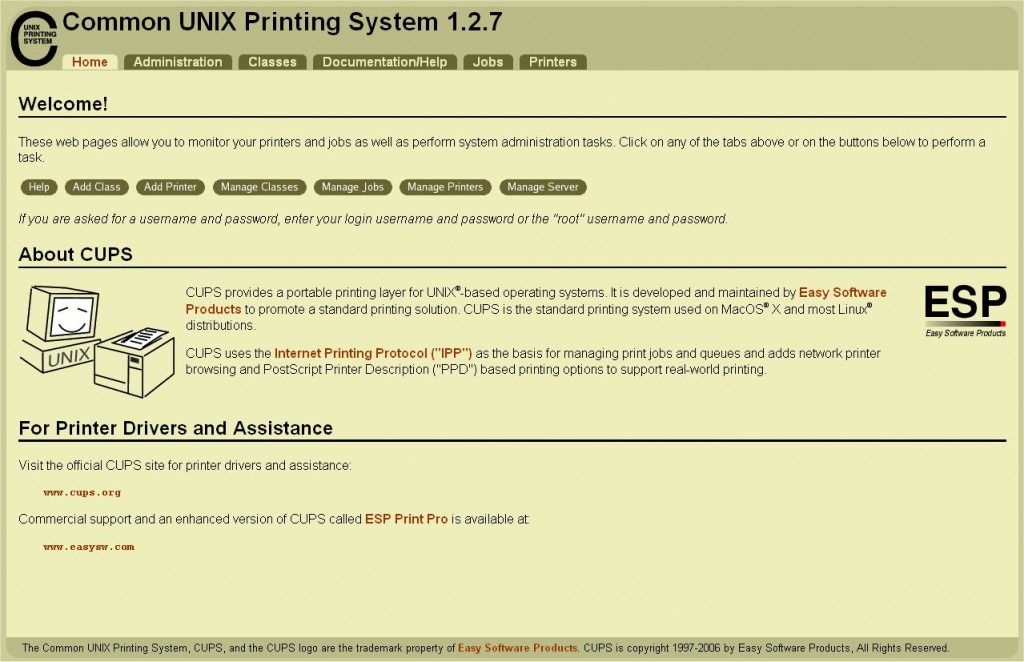 I got temporarily distracted by the subsequent steps necessary for local printing from the NSLU2 as a client but soon realised that the server was already running and accessible via the network! Once the server is running and the printer set up via the web interface (my MP210 was set up as an MP150 in lieu of the MP210 driver), all that is required is to point each of your client PC’s printer setup applications at the printer http location, http://192.168.1.2:631/printers/MP210, and try a test page… job done.

Setting up CUPS on the NSLU2 Debian install wasn’t quite as easy as on Unslung. The Debian package is named cupsys and is already installed and setup to start on boot (located in /etc/init.d) if you selected Print Server on the Debian installation.

You won’t have any joy accessing the CUPS web interface until /etc/cups/cupsd.conf has been edited to allow machines on the network to access the server. I found this tutorial which explained where to add the various lines in cupsd.conf to allow local network access.

I also added the “Allow 192.168.1.*” line to the “Restrict access to the admin pages…” block. I still had trouble accessing the admin pages through https so I commented out the “Encryption Required” line in this block.

Once I had full access to the CUPS web interface, the printer was detected on the USB port and I set it up using the HP Deskjet 990C driver (CUPS 1.2.7 doesn’t seem to have the MP210 or MP150 driver but the HP990C was suggested in the NSLU2-Linux AddPrinter tutorial as a generic USB printer driver) and printed a successful test page from my Windows machine…