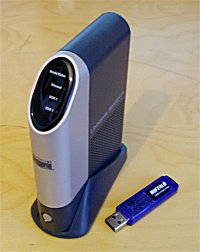 The Linksys NSLU2 (or ‘Slug’ as it’s commonly known) is a device that attaches USB hard drives to your network for shared use as Network Attached Storage (NAS). It’s small and relatively cheap route to achieve a working NAS but that’s not necessarily what makes this device interesting. The heart of the NSLU2 is an ARM processor that runs Linksys’ firmware. This firmware can be replaced with various user developed Linux-based operating systems to expand the capability of your NSLU2 beyond NAS functions…

The user community that develops the NSLU2 is based over at the NSLU2-Linux Site and this is the major source of information regarding modifications to the NSLU2. There’s plenty of information and ‘How To’ guides as to what can be done and what other people are doing with their slugs but, when I started to read around this, I initially found it quite heavy going, as with many Linux sites. While my pages won’t provide any more information than can be found elsewhere on the net, hopefully they might help someone with similar aims to myself figure things out.