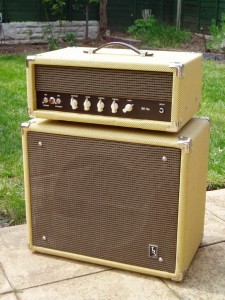 Given how I like to build stuff and play with electronics, I guess it was only a matter of time before I built an amp. I’d been toying with the idea for a while when I happened across a good deal on a Peavey Classic 30 on ebay. I’d been thinking about getting one of these as an upgrade to my Marshall VS65R so bit the bullet and bought it. The nice thing about this Peavey was that it was sold with a matching extension speaker cabinet. Very nice. The Peavey’s great but a little too loud for winding up at home. That got me thinking about low-wattage valve amps and perhaps making one to match this rather tasty cab I’d just acquired… I have a friend who’s an experienced amp builder and he suggested I look at Amp Maker as a good place to start. Although I’m an electronics engineer, I didn’t have any working experience with valves or mains AC so Amp Maker’s kits looked like a good plan for my first amp build. Anyway, to cut a long introduction short, my lovely girlfriend bought me an SE-5a kit for Christmas and this page is about me putting it together!

It’s not a good idea to build anything without a good idea of how you want it to turn out. I knew I wanted to build the amp as a head unit to match my tweed speaker cab but what else? The Amp Maker website has a nice gallery of customers’ amp projects – I rather liked the style of this one and it looked like it would match my cab nicely if I made it up in matching tweed. OK, where to get the matching materials? Suppliers of tweed didn’t seem to be a problem, but the grill cloth on my cab doesn’t match the Fender-style “oxblood” grill cloths that a lot of suppliers offer. I didn’t have much info on my cab but eventually tracked down the builders of my cab, Custom Cabtex, who were kind enough to point me at Torres Amps for the right supplies.

OK, so that was the cosmetics sorted. On a more practical note I had to find a chassis for the amp. The chassis offered by Amp Maker was too wide to sit on top of the cab I had already so I bought a smaller aluminium enclosure from Maplin.

Right, with the basic kit from Amp Maker and the chassis from Maplin I was ready to go. Assembling the amp electronics is very straightforward thanks to the clear instructions laid out in the online construction manual and the schematic diagram included in the kit. The turrets are already fitted to the main board in the correct layout for the circuit – that’s the kind of thing that saves a lot of time and frustration and I was grateful for that as I was soldering the components on.

It didn’t take too long to solder the components in place and complete the main circuit board. Next step was to solder the connecting wires to the underside of the main board. Actually this was probably the hardest part of making up the kit – the wire lengths are all dependent on the placement of the other components (transformers, valves, controls, etc.) around the chassis. The problem is that you haven’t placed the other components in the chassis yet and so have to err on the side of safety and trim the wire lengths in excess of the length you’re expecting. The only problem I had with the Amp Maker kit was that, given this, mine was a little short on wire and I ended up having to supplement what was included in the kit with some spare wire I had. In hindsight, cutting wire lengths before fitting components to the chassis was a little wasteful and it might have been better to re-order the construction steps (swapping steps 5 and 6).

OK, fitting everything to the chassis was pretty straightforward although filing the holes up to the sizes required was hard work. With everything fitted to the chassis the wiring was completed, making sure all the AC wiring was nicely twisted and routed around the edge of the chassis, away from the main board, to minimise the chance of noise. The online guide then takes you through the testing of the amp before and after initial power up – tense stuff! Fortunately, everything checked out, I put the chassis together and sat back to enjoy playing through my new amp. Nice!

For the next step, I decided I’d need a little help. I only have a couple of woodworking tools around my house and making the cabinet involves a fair bit of sawing and making four corner joints, all of which has to be straight and true. I persuaded a local joinery to make up a box for me – cut some wood to size and join it to make a box to my dimensions, open front and back. As it was to be covered, the joints didn’t have to look good, just be strong and allow for the edges of the box to be rounded over (so screw joints were probably out of the question). The most important size was an internal width of 400mm to allow for the chassis (398mm wide) plus the folded-back tweed at the sides. Internal height of 140mm gives as low a profile as the valves will allow and a depth of 280mm allows the knobs to be recessed within the cab’s protection and coincidentally matches the depth of my speaker cab. The Joiner decided to make butt-joints for the corners which were glued and then pinned, making sure the pins were at an oblique angle to keep them away from the corners where it would be rounded over. I handed him a sheet of 18mm thick pine and 1 hour later he’d done what would have probably taken me a day! Easy when you’ve got a table saw and a set of mitre-clamps…

I searched the web for a guide to covering the cabinet with tweed but couldn’t find much information. The helpful chaps at Torres Amps told me they use PVA glue to attach tweed to wood – it gives you some time to get the correct position and it dries clear-coloured. I took a good long look at the Custom Cabtex cab to make sure I knew how to arrange the tweed covering to match and then took plenty of photos as I went through the process:

So how does it sound? Well, I don’t have a decent mic so I can’t record any samples from mine, but there are some samples on the Amp Maker website. I love it! It’s perfect for room volume at home with the pre-amp set to about 7 and the master set to about 4 and basically I haven’t played my other amps since it was running.

I like to play with a bit of reverb and at the moment I’m running digital reverb in front of the amp either from my PodXT or an Electro Harmonix Holy Grail pedal. Of course it would be nice to have reverb on board the amp to cut down on the amount of stuff to carry around! I’ve already had a go at inserting a reverb stage in between the pre-amp and power amp stages, having borrowed the spring reverb tank out of my Marshall Valvestate. No luck though as I wasn’t driving the reverb tank properly and ran out of time to fix it. So, that’s the next project, fix up the reverb interface to finish the amp and then have a nice control panel etched for the finishing touch…

Well, I’ve abandoned the idea of reverb for this amp – I’ve sold on my Marshall so I no longer have a spare reverb tank to play with and I wasn’t really happy about modifying the power stage of this amp to provide the power for the reverb interface because it would likely drop the voltages throughout the amp and affect the sound. If it ain’t broke, why fix it? Besides, it also gives me a good excuse to play around with extra bits of kit to satisfy my reverb needs and I do like playing with kit… So, with the reverb question answered all that remained was the control panel. We’ve been using a local engraver recently at work and I had a chat with him to see what he could do for me. I decided to go for a reversed brown/cream look, we found a great bronzed aluminium sheet in the workshop offcuts and, well, it couldn’t have turned out much better: 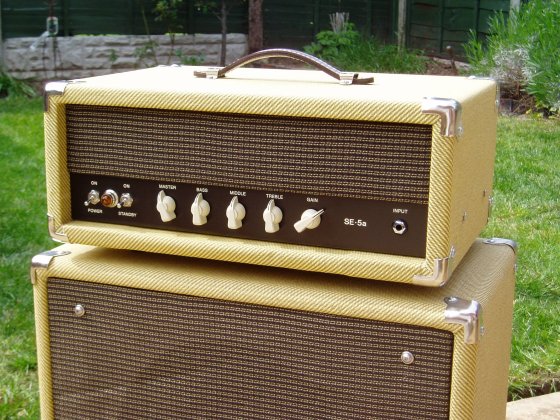 One thought on “Amp Maker SE-5a”