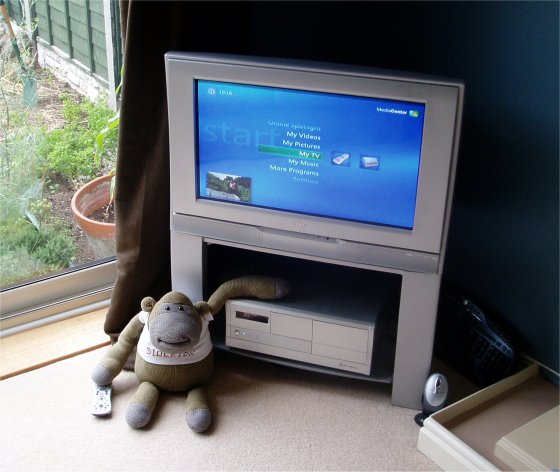 This all started when we moved into our new house and, after unpacking most of the furniture, I realised there wasn’t really anywhere easy to put the hi-fi in the lounge! “Hmmm,” I thought, “maybe this is the excuse I need to get one of those slick new wireless media players and a hi-fi amp to sit underneath the telly…?” Well, I could have done that, but instead I started the magical life-changing journey that is a DIY Media Center PC

As more and more people use digital media (photos, videos, music files…) around the house, new devices have started to appear that bring these together in the living rooms of our WiFi-enabled homes. This has coupled with the new digital TV onslaught and you can now choose from a wide range of hard-disk video recorders, wireless music players and other devices that purport to be “all-in-one” solutions for the digital living room. While I was mulling this over with a friend one day, she pointed out that perhaps I should build a PC that can do the lot – receive and record TV, play DVDs, video files, music, photos, everything – all in one box. I’d built plenty of PCs in the past and even had enough spare parts knocking around to put together a fairly capable PC. And so the journey began… 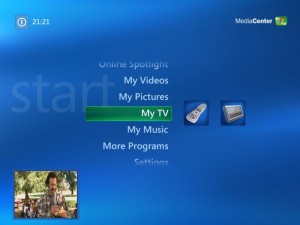 I started searching Google to see what other people had done in the area of Media PCs and Home Theatre PCs (HTPCs). Probably the best introduction I found was this Home Theatre PC Guide which basically made my mind up about what software it would run. I’d never seriously messed with Linux before so that ruled out MythTV. Personally, I think BeyondTV and SageTV both look a little too much like serious Windows applications to fit easily into my living room. Conversely, Microsoft has clearly spent a lot of effort with the look of Windows XP Media Center Edition (MCE). If this is going centre-stage in my living room it has to look good and, as you can see from this fancy interactive demo, Windows XP MCE looks good!

OK, when I first started writing this page I was going to give a narrative of my (long) journey from start to…well, uh, where I am now! Actually, to do this would produce a rather long rambling page (even worse than my HSH guitar wiring page!

). I started out trying to build this PC mainly out of spare bits I had lying around the house. It worked to some extent but Windows XP MCE is notoriously fickle about hardware drivers. This, coupled with a few hardware failures led me a merry dance through replacing just about every piece of hardware and God knows how many re-installs of Windows. It’s been a while now but I reckon I could still re-install and setup Windows XP MCE with my eyes closed… anyway, I’m rambling again. The point is – it’s not as easy as you might think to build a good Media Center PC! Instead of boring you with every little detail, I’m going to list what I now believe to be the important requirements and how the current spec of my PC meets these.

I did a lot of reading around the subject of HTPCs while I was putting this together and, if you’re going to build one yourself, you should too. Here are a few of the best articles I found, these should give you some good ideas:

For some reason I feel compelled to break this down into User Requirements and then System Requirements. Clearly I’ve been spending too much time at work recently. In this case, “User Requirements” are basically what you want the thing to be able to do.

OK, here’s the current spec of my system that now meets the requirements above:

Basing the system on Intel’s Socket 479 mobile processor is a good move in terms of the PC’s performance. These CPUs are designed to be low-power so that brings the power consumption of the PC down but also the cooling requirements which makes it easy to run silent. While the spec of this PC looks tame against today’s hard core gaming PCs, there is more than enough performance here to run WinXP Media Center Edition. Think about its main tasks – other hardware, the TV cards, DVD drive and hard disk take care of processing TV, DVD and video signals – the bulk of this work.

Fans – When I bought the Silverstone case I thought the stock fans might be a little noisy so I also purchased a 60mm AcoustiFan to compare against the stock Silverstone case fans. Once I’d installed the Akasa fan controller I was able to compare the two fans directly I found that actually the Silverstone 60mm fan was the quietest for a given voltage. CPU-wise, the cooler provided with the DFI motherboard (see pic above) has one of those whiney little fans on top. However, this can be quietened to an acceptable level (almost inaudible from the sofa) using the fan controller and the case fans are turned down to silent. I haven’t managed to run an objective temperature test yet as Motherboard Monitor doesn’t support my motherboard and, picking another DFI ‘board instead, gives me a CPU temperature reading around 75°C which I believe to be erroneous as the CPU heatsink is cool to the touch. Either way, the PC runs happily with the fans turned down to these levels.

Graphics card – At the time I put this together, the WinXP MCE Hardware Compatibility List was King. The word on the street (well, the relevant internet forums anyway) was deviate from the List at your peril. Based on that I chose the NVidia GeForce FX5200 as it was the lowest spec NVidia card on the list. No fancy 3D graphics are required on the HTPC (although the GUI’s slick animation is what demanded adherence to the compatibility list) so the GFX card doesn’t need to be a powerful beast like you’d fit in a gaming PC. As with the choice of CPU, keeping the power down keeps the heat down and that makes noise control easier.

Case – Originally I built the system into an old tower case I had lying around spare. This was good while I was developing the PC and just happened to match our old TV nicely. Not before time though, we recently replaced our dying TV with a nice new one. Finally the time had come to find a swanky HTPC case to match. Many hours were spent scouring the internet for HTPC cases and there are some great looking ones out there. In the end I chose this case from Silverstone as I already had three full-height cards in the PC which eliminated most of the low-profile cases and this case was the shortest (depth) full-height case I could find – important for fitting under the new TV.

DVD/RW Drive – I chose the NEC ND-3550A DVD/RW drive as it was the recommended drive on QuietPC in terms of low noise. I’m not actually that impressed here. Left to its own devices, the drive defaulted to its highest speeds meaning it made a hell of a racket whenever playing a DVD. This can be tweaked using a program by Nero called Drivespeed to force the drive to run at a slower speed. Drivespeed runs in the background, can be run at start-up and sits in the system tray. All very well, but I’ve had occasional difficulties with Media Center recognising some DVDs when Drivespeed is running, meaning I have to grab the mouse, switch back to Windows, turn off Drivespeed, load the DVD, get it playing, hop back into windows, start Drivespeed to silence the drive and then finally switch back to Media Center, sit back and watch the DVD. What a pain. I recommend you search for a drive that automatically selects the quietest speed. 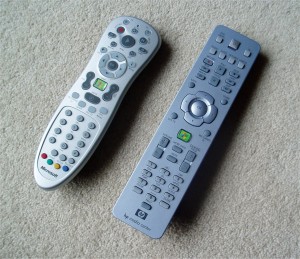 The PC is constantly powered 24/7 but, when not in active use, is switched to a ‘Standby’ mode, so-called S3 or Suspend To RAM. This powers down the CPU, fans, hard drive, etc. and leaves only the RAM powered, saving whatever the PC was doing when it was switched to Standby. When the PC is powered back up, it takes just a couple of seconds to power up all the components and retrieve its previous state from the RAM. Whatever you were doing with the PC simply re-appears on the TV screen, no long boot-up sequence. The PC can be switched in and out of Standby by the power button on the remote control and can also switch itself in order to perform scheduled tasks like recording TV.

So what have I learnt about Media Center and HTPCs? I’m very happy with how the project has turned out so far but, if I started again from scratch, I’d do a few things differently…

It’s not perfect… yet. Using a Media Center PC isn’t for everyone and at times it feels a little like I’m a System Administrator when all I want to do is watch some TV! From time to time there’s an occasional hiccup with the PC but, on balance, these are easy to deal with and the PC is now an accepted and welcome part of our lives. Still, we should all strive for perfection, so here’s a list of the outstanding issues I still need to iron out:

Only one major item remains to be implemented – surround sound. At the moment I pass stereo audio from the motherboard’s onboard sound adapter into the TV via SCART. I had thought I’d implement surround sound by taking the SPDIF output from the motherboard (after building a suitable adapter!) to an external home cinema amplifier and speakers. Now I’m not so sure. Using an external amplifier will give me another remote control (and I’ve worked so hard to reduce everything to one remote!) and another box under the TV. Also, I don’t think I need that kind of power for our lounge which isn’t exactly huge. I’m now thinking I’ll implement surround sound using a good sound card (e.g. Creative’s XFi card) running into a decent set of multimedia 5.1 speaker. Something like Logitech’s Z-5450 speaker setwhich is THX-certified and has wireless rear speakers – nice. I’m not going to drive myself round the bend looking for audiophile hi-fi products, I just don’t have the time!

Something else that’s on the horizon is Windows Vista, Microsoft’s new version of Windows which is supposed to have the next version of Media Center built in. Someearly views of the improvements are around but feedback suggests that the beta version of Vista isn’t working very well on Media PCs yet. Still, it’s interesting to know that something new is on the way. With all the fancy graphical improvements that Vista brings, will my lightweight Media PC be man enough for the job? TheWindows Vista Upgrade Advisor tool suggests it is. Well, of course it is or I’d have no reason to buy their new product!

For now, WinXP MCE 2005 does the job nicely, but let’s watch that space and see what Vista brings next year…