(Originally written around May 2007) 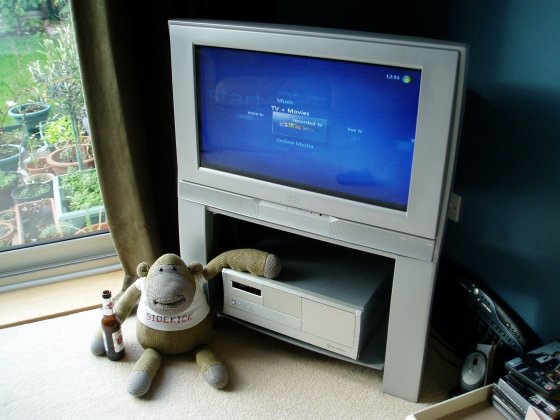 OK, I guess I had too much time on my hands or something because I decided to upgrade my Media Center PC from WinXP Media Center Edition (MCE) to the new Media Center within Windows Vista (Home Premium in this case). As with my first page about my original MCE build, there were enough difficulties (and lessons learned) to warrant a little page on this so that it might help anyone else who’s doing the same thing.

As you can probably tell from the photo above, I’ve got Vista Media Center running now, Monkey’s happy and it’s been a successful little project, but not without a few new bits of hardware. As I went through the upgrade I kept a log of any difficulties I encountered and (6 months later) that log is now supposed to make writing this page easy! Hmm, well, let’s see what happened…

The initial purchase was a copy of Windows Vista Home Premium (32-bit), a Western Digital 500GB hard drive (I was running out of space for recorded TV and also wanted to install on a separate drive, leaving the Win XP MCE install untouched if I needed to revert back to it) and 2GB RAM because everyone was talking about how RAM-hungry Vista is (although actually I ended up running the system with just 1GB of RAM).

Worryingly, the first install failed – an error on expanding files according to the error message. After a reboot (and no other changes) I managed a successful install (although quite lengthy and nerve-wracking after the initial failure!).

I found myself in Vista with no driver for my USB wifi adapter (of course) so I used my laptop and a USB stick to download and transfer:

Unexpected bonus – Windows Vista ships with a mpeg decoder so, unlike MCE, I don’t have to buy an upgrade to PowerDVD

Two problems to start with:

Instead of waiting for Safecom, Netgear and NVidia to sort out their drivers, I placed an order for a D-Link USB adapter (having checked vista driver availability) and a Radeon 9250 graphics card (AGP, fanless, s-video). Then I realised the 9250 isn’t supported in Vista! The minimum ATI card is a Radeon 9500! So I cancelled that order, got nervous about using a D-Link product that I’d not used before and placed a new order for a Radeon 9550 and a Netgear WG111v2.

The Radeon 9550 and Netgear WG111v2 arrived. Installed, rebooted with Radeon, no problems, set up s-video underscan correction/positioning. The WG111 worked fine with Vista’s network setup but I later found that it was having trouble reconnecting to the network after waking from sleep mode. I’d previously got used to using the native wifi support in Windows rather than manufacturers’ own wifi utilities because I’d had problems with the two things fighting each other and found it was just easier to let Windows manage the connection. This issue has changed that as I now find the network connection is only restored after sleep if I allow the Netgear utility to manage the connection.

OK, with a network (and thus internet) connection I was now able to run through the Media Center setup noting some nice new features for S-Video overscan compensation. No problem with TV setup and we’ve now got a working Media Center.

Sometime in the middle of that episode my 2GB of RAM arrived. Hmmm… despite the manufacturer’s web page for my motherboard stating it can support “up to 2GB with high density 512Mbit technology”, the high density RAM I bought didn’t work. After trawling over the internet for a while it seems that there may well be two definitions of high density where RAM is concerned but, to be honest, I’m still not too clear on this issue. I decided to cut my losses there. I redistributed the sticks of RAM in my various PCs to give me 1GB in this PC.

1GB seems to be fine for my Vista Media Center but, at first, I did notice a lot of hard drive activity (translating into noise) during simple TV watching. Yes, the TV show is constantly being recorded to the hard drive for rewind/pause functionality but WinXP MCE never made any noise during this operation. So I read around a bit more and found that people were saying use of Vista’s ReadyBoost feature would cure this issue. I got hold of a 4GB Crucial Gizmo Overdrive and sure enough using this as a ReadyBoost drive stopped the excessive hard drive activity during normal operation.

With the basic functions in place I turned to the detailed settings.

Standby and wake from USB IR receiver… Vista has new sleep functionalityexplained here. Vista uses a new sleep mode – ‘Fast S4’ rather than S3 which suspends to HDD rather than RAM. It’s slower than MCE using S3 but this linkexplains the advantage. Originally I spent quite a while dipping in and out of various config menus trying to set the power settings and get it all working nicely. More recently I’ve discovered MCE Standby Tool (MST) (which also works in Vista). This brilliant application basically does all the hard work for you and makes all the required settings changes within Windows for whatever standby scheme you want. Since using MST I’ve eliminated the ‘random wake up’ issues – when my PC is meant to be asleep it is, when it’s meant to wake it does. A totally brilliant solution to one of my long-running Media Center issues.

Another issue encountered was that Nero Drivespeed, the app I was using to silence the DVD drive during playback in MCE, doesn’t work in Vista. To be honest it was only working intermittently in WinXP MCE because there seemed to be some issues with it restoring itself after sleep mode. This can now be solved in Vista using AnyDVD which works a treat.

It’s not really a Vista-specific thing, but I should mention somewhere the issues I’ve had getting Network Attached Storage (NAS) working with Media Center and here seems as good a place as any.

The aim of NAS is for me to have a central storage area for my documents and media library so that each of my PCs (two desktops, a dual-boot laptop and the media PC in the lounge) can access this single up-to-date set of files. It also means I only have worry about backing up this central location – with all my important files on the NAS, each PC really only has its Operating System and applications installed on it.

I started off with a Netgear SC-101 Storage Central because I liked the idea of cheap and easily replaceable/upgradeable IDE hard drives. Unfortunately the SC-101 was flawed in that it requires a conduit application to be installed on each client PC that needs to access it – that application was incompatible with WinXP MCE so the SC-101 had to go on eBay.

Next try was a Safecom NAS hard drive caddy, again going for the cheap IDE hard drive route. No end of problems with this, mainly down to a slow response time over the network. From my desktop PC I’d find myself having to refresh folder browsing windows before all files would be shown and Media PC would interpret this as files missing from the media library. Not good. This device has been relegated to simple USB hard drive caddy now and is used for periodic backup purposes.

Finally I learnt my lesson and spent some real money on NAS. A friend had since built a media PC and was having good results with a Buffalo LinkStation serving DivX videos over his wifi network and had none of the problems I did so I splashed out on a 250GB LinkStation Live. Money well spent after the problems I’d has with the other NAS devices. The LinkStation has basically been performing faultlessly for months now and it “just works”.

So, in summary, Vista Media Center works nicely on my low-power media PC (original spec here) and only a few hardware tweaks were required:

Along the way I also stuck in a larger hard drive (so now I have 700GB of storage on the PC) and also sorted out my NAS solution. I’ve also fixed some of the leftover niggles that I had with MCE – sleep mode now operates flawlessly, no more random wake ups!

I’d run WinXP MCE for probably 18 months before upgrading to Vista and I’ve had that now for about 6 months. The improvements I’ve found over MCE are mostly visual with a few nice touches thrown in. It may sound superficial but, when Media Center is the centrepiece of your living room and the only portal to your TV, music, videos and picture shows, it counts for a lot! I’m not going to do a review of Vista Media Center here, there are plenty of those in the internet if you want to search for them. This page is really to show you what changes I’ve had to make to my PC to run it and hopefully someone will find something useful here.