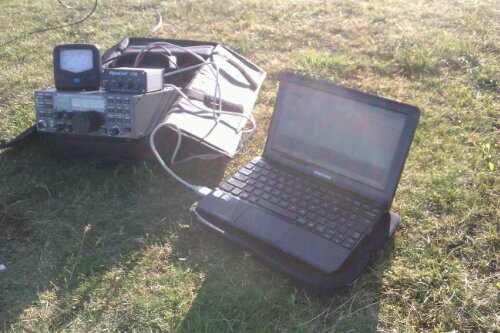 Later edit- …and although my phone’s camera was struggling shooting into the Sun, the readability of the netbook’s screen was good when set to the higher brightness levels, even without a glare shield.

I’ve bought the netbook to replace my ageing IBM T41 laptop in this setup. The netbook lightens the portable kit by over 1kg, improves screen readability outdoors, is smaller and easier to pack AND is a faster machine. Obviously the keyboard is smaller than a normal-size laptop (and the IBMs do have good keyboards) but I knew this would be an area to pay attention to and I spent some time typing and comparing models in the computer shop – this Samsung NP NC-110 doesn’t compromise as much as some in the key layout and was the best for me to type on. 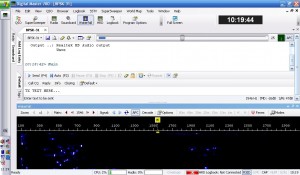 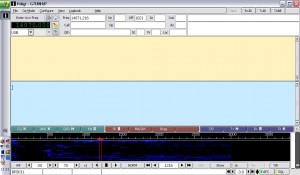 One other area of compromise is screen area – I’ve moved from 1024×768 on the IBM to 1024×600 on the netbook on a smaller screen (14″ has become 10″). I had thought I might end up using Ham Radio Deluxe on WinXP but the fairly busy interface is too crowded on the netbook screen – there may be some tweaking to be done. In the meantime, FLDigi (which I had been using on Linux) has a fairly minimal interface by default and looks good on the netbook. I’m still learning my way around the software so I don’t know if I’ll settle on this.